Originally created as Alisarda in Olbia (Sardinia), Air Italy passed through various changes, acquisitions and extensions throughout its existence. Prinz Karim Aga Khan IV founded the private airline under the name Alisarda in 1963, the name expressing the regional connotation to Sardinia. Target of the newly created airline was the support of tourism at Costa Smeralda in the northeast of Sardinia. At the start of operations, the airline flew with Nord 262 aircraft. Five years later, in 1968, the equipment consisted of Fokker F-27 aircraft transporting 20.000 passenger annually to Sardinia.

In 1974 the jet age began –and Alisarda operated now short variants of DC-9 aircraft replacing the Fokker F-27. In addition, a new maintenance area could be set-up at the newly created airport of Olbia. Using DC-9s offered as well the possibility to open international routes and extend the routes –thereby adding new airports like Paris, Geneva, Zurich and Frankfort to the network.

Finally, in 1990 the Italian authorities granted Alisarda as well the licence for flights within the Italian mainland. Based on that opportunity connections to Milano or Roma were opened in direct competition with Alitalia.

In 2006 Meridiana acquired a 30 percent share in the Italian airline Eurofly. Consequently, in 2009 a complete merge of the two airlines was announced, documented as well by the new name MeridianaFly. In 2001 a potential merger was negotiated with Alitalia, which was finally not implemented due to concerns of the EU Commission. Instead, Meridiana acquired with Air Italy another airline in 2011 – which was operated afterwards as separate airline next to MeridianaFly.

In January 2013 the Italian authorities then revoked the licence due to economic reasons. After corrective measures Meridiana received the licence back, but had to extend now year by year based on annual checks. As solution to this situation Air Italy was integrated 100% in MeridianaFly and the new company choose as market name again Meridiana. In addition, the company decided to retire all Airbus and McDonnell Douglas aircraft and operate only with Boeings to reduce costs.

After all these mergers and acquisitions (as described above) which occurred on initiatives launched by the airline itself, Meridiana was analysed as investment opportunity in June 2015 by Qatar Airways – which was completed with a 49% acquisition in July 2016. The new mother company made a quick decision regarding the future fleet: In April 2017 the CEO of Qatar Airways announced that the airline would assign 20 Boeing B737-Max 8 to Meridiana from an already existing order of 60 airframes. Furthermore, 30 Boeing B787-9 Dreamliners already ordered for Meridiana would be assigned for long haul routes and the first of these aircrafts should arrive in May 2019. As additional step Meridiana was rebranded as Air Italy on March 1st. 2018 – at the same time the AOC (Air Operations Certificate) of the old Air Italy was returned and the one from Meridiana taken over (so exactly opposite to the rebranding). As home base of the airline Milan Malpensa was chosen, official company headquarter and maintenance stayed in Olbia.

In the last years Air Italy operated with Boeing B737-700 and -800 on short and medium haul destinations and with four A330-200 on long haul routes, these later aircraft provided by the mother company Qatar in 2018. The first three Boeing B737-Max 8 were taken over in 2018 as well, but had to be parked soon due to the worldwide grounding. The costs for renting aircraft from other airlines plus the expansion caused huge financial difficulties latest from mid-2019 onwards, which finally made a survival impossible. Consequently, and as in addition several investorsdidn’t want to engage further in AirItaly, the Board of Directors decided on February 11th. 2020 to stop all operations immediately. Thus a glorious planned future ended –and a rich history – abruptly and with an immediate insolvency.

by Bruno Geiger and Florian Szczepanek

Atlas Global, originally founded as Atlas Jet International Airways, ceased operationson February 12th. 2020 due to financial difficulties. Founded on March 14th. 2001, the airline was a 100% subsidiary of Öger Group and aimed to establish itselfwithin the European Charter Operations and as well Turkish national network. Based on a fleet ofrented Boeing B757 operations were launched in the same year.

In 2005 the decision to re-brand the airline was made, changing the name to AtlasJet and introducing a new colour scheme with red elements. At the same time Öger Group sold its last shares to AtlasGlobal Group which resulted in AtlasJet now being an independent airline.

In 2013 AtlasJet Ukraine and ZagrosJet were founded, which operated own flights as subsidiaries. ZagrosJet offered flights from the autonomous region Kurdistan to northern Europe and the Near East. AtlasJet Ukraine operated flights between Kharkiv and Istanbul and to charter destinations like Antalya and Bodrum. 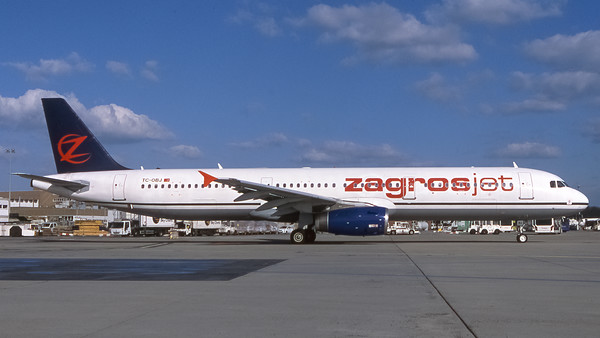 Another rebranding to AtlasGlobal occurred on April 1st. 2015 thereby making the ownership of AtlasGlobal Group clearly visible as well on the planes. Furthermore, the fleet was now standardised on Airbus A319, A320 and A321. Sole exception was the temporary lease of two Boeing B737-800, which were operated in 2017 and 2018 only. In 2017 the subsidiary ZagrosJet ceased operations – background was the ban of international flights from the autonomous region Kurdistan by the Iraqi government –thereby extinguishing the business model of ZagrosJet.

AtlasGlobal itself extended the model of operating a sole Airbus fleet with three Airbus A330 in 2019, after three such aircraft were rented already in 2018. However, in mid-2019 the airline including its subsidiary in Ukraine experienced financial difficulties, requiring a temporary end of operations in November 2019. A part of thefleet of 16 aircraft was returned to lessors or parked on Turkish airports. After a new financial investment, the flight operations were restarted on December 21st. 2019 with four A321. The aircraft operated mainly on routes within Turkey as charter flights to touristic destinations like Antalya and Bodrum are not highly frequented during the winter season.

But this relaunch was in the end not successful long term. Consequently, on February 12th. 2020 Turkish medias informed that AtlasGlobal would go to insolvency completely and employees don’t need to show up to work anymore. Shortly after, the AOC (Air Operations Certificate) was revoked by the Turkish Civil Aviation Authority SHGM, thereby closing the history of AtlasGlobal.

by Bruno Geiger and Florian Szczepanek

Cargo Logic Air –CLA was founded March 3rd. 2015 by Volga Dnepr Group as subsidiary with a base on the airport London Stansted. The first flight was operated with a freight jumbo wet leased from Aircastle and routed from Doncaster via Frankfurt to Bari in Italy. In the following months the aircraft was offered for freight charter flights worldwide to occupy fully the aircraft.

A second Boeing B747-8 was sub-leased in February 2016, which operated the first scheduled service from Stansted to Atlanta, Mexico-City and Houston to Frankfurt and on to Abu Dhabi. Supported by the growth in cargo business the fleet was extended by two additional Boeing B747-400 resulting in four Jumbo aircraft in operations at the end of 2018.

Sadly, the airline experienced financial difficulties mid of 2019 –caused by overcapacity in air freight overall and low utilisation of offered flights. Consequently, the fleet was reduced to one aircraft at the end of 2019 already, offering only a minimum of connections.

On February 24th. 2020 all flights were cancelled finally and the last Jumbo was returned to sister company Air Bridge Cargo. The AOC (Air Operator Certificate) was returned as well to the British Civil Aviation Authorities. This obviously seals the fate of CLA.

Air Cargo Global –ACG – was founded under leadership of Andrey Goryasko as CEO in 2013 on the home-base Bratislava as successor for the Air Cargo Germany. Operations were started with a Boeing B747-400 taken over from Air Cargo Germany in summer 2014. The main flight route offered was between Frankfurt and Bratislava to Shanghai and Hongkong.

Already in November 2016 an additional Boeing B747-400 from ACT Cargo was acquired which allowed the airline to offer now as well ad-hoc charter flights. Consequently, humanitarian flights on short notice to crisis regions in West Afrika could be performed. Thanks to big market demand an additional freight Jumbo was taken over from ACT Cargo in June 2017.

Sadly, Air Cargo Global experienced as well by financial difficulties caused by the overall overcapacity of freighters in the market. All aircraft were parked in December 2019 due to missing demand, two of the Jumbos were parked in Liege. The third airframe is in maintenance in Kazakhstan according to the existing information.

The employees in Germany were laid off since then and the AOC (Air Operations Certificate) returned. Thus within weeks the second fright airline disappears from themarket.